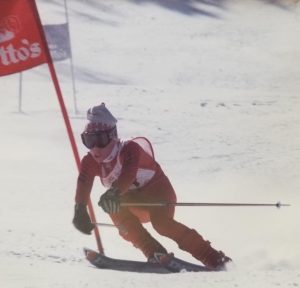 Dax grew up in Fredericton the son of the late Imy and Gary Brown. He began his skiing career at Crabbe Mountain, joining the race club as soon he was of age. Dax was a strong athlete and enjoyed playing hockey and soccer as well. His athletic ability came naturally as both his parents were internationally recognized athletes themselves, Imy in gymnastics and Gary in hockey.

When Dax was twelve he chose to focus on ski racing. Both his parents endorsed his decision and enrolled Dax at Carrabassett Valley Academy [CVA] in Maine.

Dax’s winsome smile, open manner and
happy boyishness hardly gave a clue as to
what to expect on the slopes. Those who watched him from trailside quickly learned why he was nicknamed the Canadian bullet — his faster speed was always evident by the second or third gate.

Dax had an impressive racing resume. Twice he was a direct qualifier for the Eastern Junior Olympics [JO] with fourth and eighth place finishes.

While Dax placed well at his level, it was always his finish in the overall standings that made him most proud. In March of 1985, Dax Brown won the Canadian Juvenile National (K2 Nationals) Slalom at Mount Bromont, Quebec. This title made him the first skier from an Atlantic Canadian province to win a national ski title. The week before this incredible win, Dax had been training at his home hill — Crabbe Mountain, with his home team — Crabbe Mountain Race Club.

On July 7, 1985 at age 14, Dax was tragically killed in a highway accident just outside of Fredericton.

In 2011, the Old T-Bar 1 was removed and a new trail, Dax Traxx, in memory of Dax, was opened in its place. As well, the slalom portion of the Sugarloaf Opener, part of the U.S. Ski and Snowboard Association annual race season is named the Dax Brown in his memory.

This humble young master of the ski slopes will never be forgotten. His challenge and example remain for all to follow: set tough but reasonable goals, work hard, and always do the very best you can. 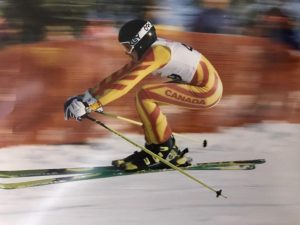 Stephen Peppin was nearly six years old when he made his first venture to Silverwood Ski Hill in 1986. We never did get on the Tow for at least the first five trips, but we purchased a lift ticket each time.

The next trips were to Crabbe Mountain and then a few trips to Sugarloaf, Maine. We also spent time on the hill at Whistler, BC but it was a trip to Mont Sainte- Anne, QC when his attitude changed and he wanted to be the first person down the hill.

Stephen eagerly joined the
Crabbe Mountain Race Club in the fall of 1994. It was a very successful year for him and he received the “Rookie of the Year” Award. Cam Rust and Jason Jenson were instrumental in his development as a skier.

Many Racing Events took place at Crabbe and other Atlantic region hills over the next three years. Stephen was an enthusiastic participant and a great team supporter.

His passion and interest eventually changed from racing to coaching and helping others develop their skills. He received his Level I Ski Instructor Certificate and Level I and II Ski Coach Certification. Stephen was also the Leader/Instructor for an Advanced Ski Program that many non-racing skiers participated in.

After graduation from Fredericton High School in 1998, Stephen became a Certified Microsoft Technician and worked at the University of New Brunswick (Fredericton) on computer projects. His position was Resnet Administrator. Stephen was registered to participate in a Bachelor of Computer Science undergraduate program in 2001.

Stephen left us in May of 2001 due to a tragic bicycle accident. Bright memories live on in special places like Steve’s Drive Thru and events such as the Crabbe Mountain Race Club Memorial Race. 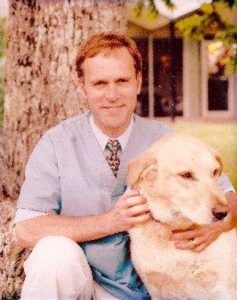 Mark Lawrence was a man who loved all seasons but particularly embraced winter and the joys a good snowfall could bring to those who knew how to best enjoy it. That is why Mark and his family purchased a chalet at Crabbe Mountain in 1996.

Mark was a dedicated Veterinarian and had a busy practice, but he found time to generously donate his time to all things Crabbe Mountain.

He was an enthusiastic member of the
Crabbe Mountain Race Club and won
Volunteer of the Year in 2001. His role as
Chief of Gate Keepers was a perfect fit for
him as his sincere approach and outgoing
personality ensured a steady supply of
parents willing to stand in the freezing cold
for hours to perform the important
responsibilities of the gate keeper. Mark
was an active fundraiser for the Club and
was responsible for securing a major
sponsorship from the Subaru Car Dealership. Additionally, he participated in numerous fundraising activities including the annual Ski Swap and bottle drives.

Mark was a racer himself and never missed the adult Wednesday night race event or an opportunity to race in the Crabbe Mountain Race Club Memorial Race. He believed that it is your response to winning and losing that makes you a winner or a loser. He passed this philosophy on to his three children who were members of the Crabbe Mountain Race Team and all had successful downhill race and free-style ski careers.

Mark was a man of vision and always had a keen eye for a good downhill slope. He was one of the pioneers who began cutting the trail that is now known as Pug’s Powder. The trail was named after the Lawrence’s dog (a Pug named Abby) who dutifully followed Mark into the trail as he cleared trees and brush.

We lost Mark in 2001 but his contributions to the Race Club and the Crabbe Mountain community were many. His spirit will always be on the Mountain and you can be assured he is cheering on all the racers and skiers as they set out on the hill. 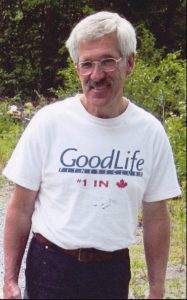 The Dave Moore Memorial Award was being presented for the first time in 2014. This trophy honours a volunteer with the Crabbe Mountain Race Club, who has gone above and beyond in their efforts to contribute to both a successful club experience and race season.

Dave Moore was that kind of volunteer. Through his 15 years with Crabbe Mountain Race Club he was a supportive race parent for his two children, Steven and Julie. He was a tireless volunteer on the hill generally, and actively involved in the races that were held on Crabbe Mountain.

Dave was also involved at the administrative level for many
years as club president and on the board of NB Alpine
(SkiNB). He spoke with great pride of the work that was
done by so many to have the race shack placed at the top of
the hill, to have King’s Horn race trail homologated, start and finish huts built, and the development of the successful bid to have the first FIS races come to Atlantic Canada in 1992 – both to Crabbe Mountain and Mount Farlagne.

In his retirement, Dave enjoyed being a ski instructor for both the school programs and CADS (Canadian Association for Disabled Skiing) — working with disabled skiers. He especially enjoyed being able to guide his brother, Don Moore, who is a blind skier.

Although downhill skiing was his favourite winter activity he also enjoyed cross-country skiing on the Slippery Mitten Trails as well as snowshoeing the Crabbe Mountain trails with his wife, Valerie.

Their son, Steven had success racing at the national level and in the eastern U.S. He attended Carrabassett Academy at Sugarloaf, Maine and skiied for Stratton Mountain before spending many years coaching.

Julie also shared her father’s love of skiing, and coached for Crabbe Mountain Race Club for a short time following her years as a racer.

Dave died suddenly in an accident on hill at Crabbe Mountain on Tuesday, January 8, 2013 at the age of 62. 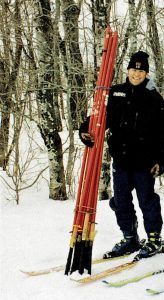 Jason was born in Fredericton NB where he developed a lifelong passion for the outdoors. At an early age the sport on the top of his list was alpine ski racing.

Jason successfully worked his way up the ranks as a member of the Crabbe Mountain Race Club. After a major crash while training, Jason was required to wear a helmet making him the first racer at Crabbe to ski fulltime with a helmet.

In 1986 Jason’s pursuit of ski racing took him to Carrabassett Valley Academy in Maine. After graduating from CVA in 1989, Jason stayed on for an extra post grad year.

Jason’s desire to give back to the sport he loved was very evident with his commitment, professionalism and outgoing personality while coaching at Crabbe Mountain from 1993 to 2001.

On race day, Jason was often at the top of the hill working as the start coach. He always had his radio chest harness, drill and a pack full of race gear that included everything such as extra goggles, screwdrivers, scrappers, diamond stones and duct tape.

In 2005 Jason graduated with a degree in Geological Engineering at the University of New Brunswick (Fredericton). While based in Calgary he had a successful career in the pipeline industry in Canada and the US.

While his racing and coaching careers had ended, skiing and Crabbe Mountain were always in his heart. 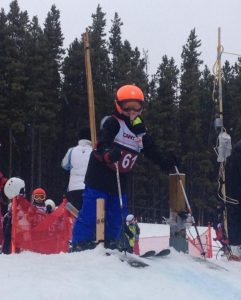 Abby was a high spirited 9 year old not unlike any other grade 4 kid.

She was always laughing and smiling when on the hill. She
made a lot of friends and loved to hang out with them and
carve up the mountain with them. There was never a day on the snow that Abby wasn’t cracking jokes with her coach, laughing with her teammates, and skiing around the mountain with the biggest smile on her face. The 2015/16 ski season started early with dryland training in September. This year Abby started in a higher level and a new team: U-10+. There she was with a lot of old friends, but also met new friends, new coaches and continued her love for skiing. She was super excited about the new challenges this season would bring.

On December 6, 2015 Abby had an accident that would instantly take the life from her. She was off with her group and took a wrong turn into a tree.

Abby never won 1st, 2nd or 3rd, but she had fun. Abby always showed up to the hill with a smile, did whatever the coaches asked of her, put in 110% and never said she didn’t want to go.

Abby’s family wanted her name, her happiness, her loving spirit, and love for skiing to be remembered forever, so they started the “Abby Award”. It is a snowflake medallion which is presented to a U10 level ski racer. This award is for the athlete who shows up in the morning with a smile on their face. They try their best and give 110%, do what the coach asks, never complains and cheers on their teammates. It is meant for the athlete who is there because they want to have fun and they truly love the sport of skiing.

The goal is to have this award given out annually to one U10 ski racer in every club across the country who brings their happiness, high spirit and fun loving attitude to their ski team.